In Part 1 and Part 2 I showed the X server acceleration code as used by the evdev and synaptics drivers. In this part, I'll show how it compares against libinput. 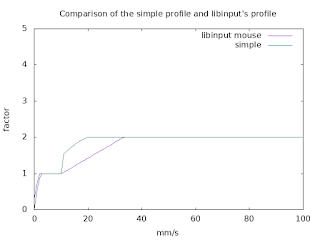 Classic vs libinput's profile
Turns out the pointer acceleration curve, mostly modeled after the xserver behaviour roughly matches the xserver behaviour. Note that libinput normalizes to 1000dpi (provided MOUSE_DPI is set correctly) and thus the curves only match this way for 1000dpi devices.

30mm/s is still a relatively slow movement (just move your mouse by 30mm within a second, it doesn't feel fast). This means that for all but slow movements, the current server and libinput acceleration provides but a flat acceleration at whatever the maximum acceleration is set to.

The biggest difference libinput has to the X server is that it exposes a single knob of normalised continuous configuration (-1.0 == slowest, 1.0 == fastest). It relies on settings like MOUSE_DPI to provide enough information to map a device into that normalised range.

Let's look at the libinput speed settings and their effect on the acceleration profile (libinput 1.10.x). 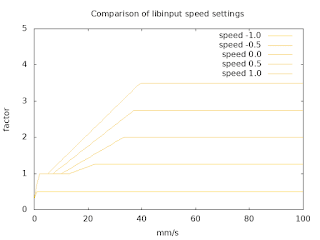 libinput speed settings
libinput's speed setting is a combination of changing thresholds and accel at the same time. The faster you go, the sooner acceleration applies and the higher the maximum acceleration is. For very slow speeds, libinput provides deceleration. Noticeable here though is that the baseline speed is the same until we get to speed settings of less than -0.5 (where we have an effectively flat profile anyway). So up to the (speed-dependent) threshold, the mouse speed is always the same.

Let's look at the comparison of libinput's speed setting to the accel setting in the simple profile: 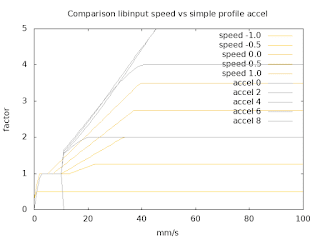 Comparison of libinput speed and accel settings
Clearly obvious: libinput's range is a lot smaller than what the accel setting allows (that one is effectively unbounded). This obviously applies to the deceleration as well: 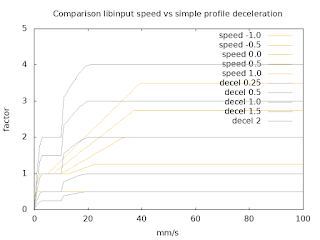 Comparison of libinput speed and deceleration
I'm not posting the threshold comparison, as Part 1 shows it does not effect the maximum acceleration factor anyway.

Either way, there is one possible solution for libinput to implement: to change the base plateau with the speed. Otherwise libinput's acceleration curve is well defined for the configurable range. And a maximum acceleration factor of 3.5 is plenty for a properly configured mouse (generally anything above 3 is tricky to control). AFAICT, the main issues with pointer acceleration come from mice that either don't have MOUSE_DPI set or trackpoints which are, unfortunately, a completely different problem.

I'll probably also give the windows/OS X approaches a try (i.e. same curve, different constant deceleration) and see how that goes. If it works well, that may be a a solution because it's easier to scale into a large range. Otherwise, *shrug*, someone will have to come with a better solution.

[1] I've never been able to reproduce the same gain (== factor) but at least the shape and x axis seems to match.

Posted by Peter Hutterer at 1:47 PM