Diagrams were generated by gnuplot, parsing .dat files generated by the ptrveloc tool in the git repo. Helper scripts to regenerate all data are in the repo too. Default values unless otherwise specified:

All diagrams are limited to 100 mm/s and a factor of 5 so they are directly comparable. From earlier testing I found movements above over 300 mm/s are rare, once you hit 500 mm/s the acceleration doesn't really matter that much anymore, you're going to hit the screen edge anyway.

The choice of 1000 dpi is a difficult one. It makes the diagrams directly comparable to those in Part 1 but touchpads have a great variety in their resolution. For example, an ALPS DualPoint touchpad may have resolutions of 25-32 units/mm. A Lenovo T440s has a resolution of 42 units/mm over PS/2 but 20 units/mm over the newer SMBus/RMI4 protocol. This is the same touchpad. Overall it doesn't actually matter that much though, see below.

This driver has a custom acceleration profile, configured by the MinSpeed, MaxSpeed and AccelFactor options. The former two put a cap on the factor but MinSpeed also adjusts (overwrites) ConstantDeceleration. The AccelFactor defaults to a device-specific size based on the device diagonal. 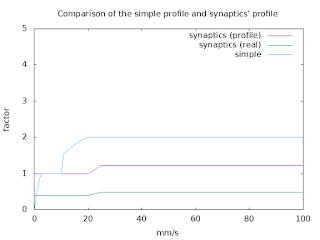 The actual acceleration curve is just a plain old linear interpolation between the min and max acceleration values. If you look at the curves closer you'll find that there is no acceleration up to 20mm/s and flat acceleration from 25mm/s onwards. Only in this small speed range does the driver adjust its acceleration based on input speed. Whether this is in intentional or just happened, I don't know.

The accel factor depends on the touchpad x/y axis. On my T440s using PS/2, the factor defaults to 0.04. If I get it to use SMBus/RMI4 instead of PS/2, that same device has an accel factor of 0.09. An ALPS touchpad may have a factor of 0.13, based on the min/max values for the x/y axes. These devices all have different resolutions though, so here are the comparison graphs taking the axis range and the resolution into account: 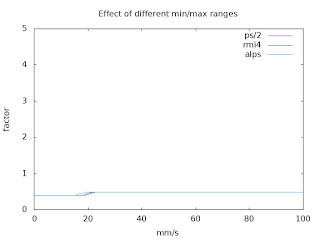 Acceleration curves on different touchpads
The diagonal affects the accel factor, so these three touchpads (two curves are the same physical touchpad, just using a different bus) get slightly different acceleration curves. They're more similar than I expected though and for the rest of this post we can get away we just looking at the 0.04 default value from my touchpad. Note that due to how synaptics is handled in the server, this isn't the whole story, there is more coordinate scaling etc. happening after the acceleration code. The synaptics acceleration profile also does not acccommodate for uneven x/y resolutions, this is handled in the server afterwards. On touchpads with uneven resolutions the velocity thus depends on the vector, moving along the x axis provides differently sized deltas than moving along the y axis. However, anything applied later isn't speed dependent but merely a constant scale, so these curves are still a good representation of what happens.

The effect of configurations 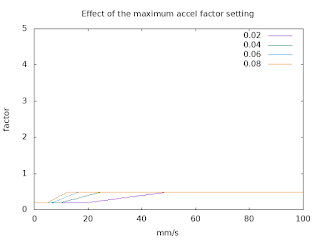 Effect of the AccelFactor configuration option

And how do the min/max values play together? Let's adjust MinSpeed but leave MaxSpeed at 0.7. 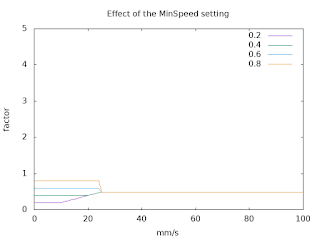 Effect of the MinSpeed configuration option

MinSpeed lifts the baseline (i.e. the minimum acceleration factor), somewhat expected from a parameter named this way. But it looks again like we have a bug here. When MinSpeed and MaxSpeed are close together, our acceleration actually decreases once we're past the threshold. So counterintuitively, a higher MinSpeed can result in a slower cursor once you move faster.

MaxSpeed is not too different here: 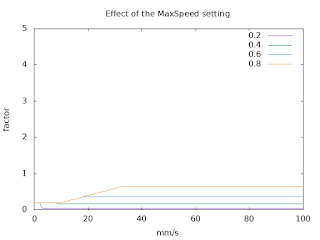 Effect of the MaxSpeed configuration option
The same bug is present, if the MaxSpeed is smaller or close to MinSpeed, our acceleration actually goes down. A quick check of the sources didn't indicate anything enforcing MinSpeed < MaxSpeed either. But otherwise MaxSpeed lifts the maximum acceleration factor.

These graphs look at the options in separation, in reality users would likely configure both MinSpeed and MaxSpeed at the same time. Since both have an immediate effect on pointer movement, trial and error configuration is simple and straightforward. Below is a graph of all three adjusted semi-randomly: 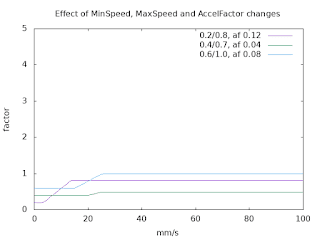 Effect of all three configuration options combined
No suprises in there, the baseline (and thus slowest speed) changes, the maximum acceleration changes and how long it takes to get there changes. The curves vary quite a bit though, so without knowing the configuration options, it's impossible to predict how a specific touchpad behaves.

The graphs above show the effect of configuration options in the synaptics driver. I purposely didn't put any specific analysis in and/or compare it to libinput. That comes in a future post.

Posted by Peter Hutterer at 1:26 PM