Sounds like déjà vu? Right, I posted a post with an almost identical title 18 months ago or so. This is about Tuhi 0.2, new and remodeled and completely different to that. Sort-of.

Tuhi is an application that supports the Wacom SmartPad devices - Bamboo Spark, Bamboo Slate, Bamboo Folio and Intuos Pro. The Bamboo range are digital notepads. They come with a real pen, you draw normally on the pad and use Bluetooth LE and Wacom's Inkspace application later to sync the files to disk. The Intuos Pro is the same but it's designed as a "normal" tablet with the paper mode available as well.

18 months ago, Benjamin Tissoires and I wrote Tuhi as a DBus session daemon. Tuhi would download the drawings from the file and make them available as JSON files over DBus to be converted to SVG or some other format by ... "clients". We wrote a simple commandline tool to debug Tuhi but no GUI, largely in the hope that maybe someone would be interested in doing that. Fast forward to now and that hasn't happened but I had some spare cycles over the last weeks so I present to you: Tuhi 0.2, now with a GTK GUI: 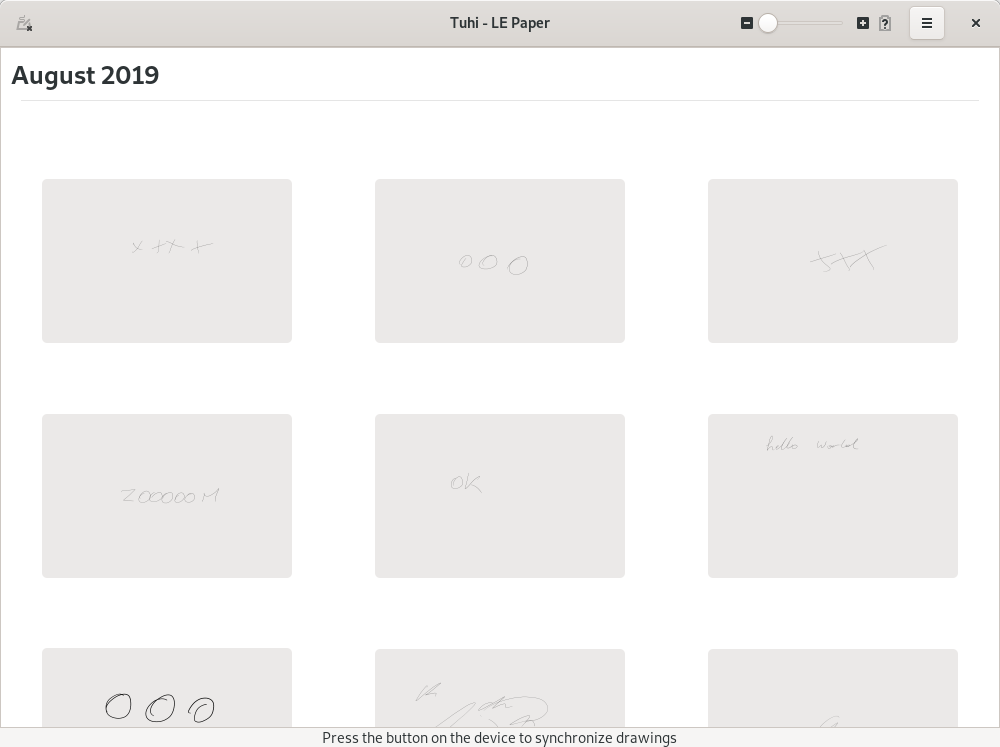 It's basic but also because it shouldn't do much more than just downloading the drawings and allowing you to save them. This is not an editing UI, it's effectively a file manager for the drawings on the tablet. And since by design those drawings get deleted as you download them, there isn't even much to that (don't worry, Tuhi doesn't really delete files, you can recover almost everything).

Under the hood there were some internal changes too but I suspect they'll be boring to most. The more interesting bits are reworks so we can test the conversions a lot better now and - worst case - recover files if Tuhi crashes. It is largely reverse-engineered after all.

On that note I would like to also extend my thanks to Wacom who have provided us with some of the specs for the protocol (under NDA, we cannot share these with the community, sorry). These specs helped tremendously understanding the protocol bits that were confusing at best and unknown at worst. There are still some corners in the protocol that we don't know but for the most recent generation (i.e. Intuos Pro) we should have correct parsing of the protocol.

And many thanks to Jakub Steiner for the fancy logo.

And, as of a few minutes ago, Tuhi is available as flatpak from flathub.org. For the forseeable future is is the best way to install Tuhi.