A short overview of touchpad devices

Below is an outline of the various types of touchpads that can be found in the wild. Touchpads aren't simply categorised into a single type, instead they have a set of properties, a combination of number of physical buttons, touch support and physical properties.

For years this was the default type of touchpads: a touchpad with a separate set of physical buttons below the touch surface. Such touchpads are still around, but most newer models are Clickpads now. 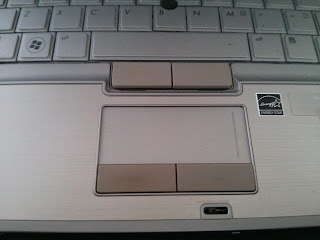 Clickpads are the most common type of touchpads these days. A Clickpad has no separate physical buttons, instead the touchpad itself is clickable as a whole, i.e. a user presses down on the touch area and triggers a physical click. Clickpads thus only provide a single button, everything else needs to be software-emulated. 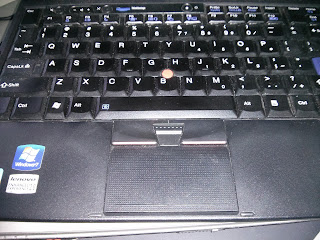 A clickpad on a Lenovo x220t. Just above the touchpad are the three buttons associated with the pointing stick. Faint markings on the bottom of the touchpad hint at where the software buttons should be.

Right and middle clicks are generated either via software buttons or "clickfinger" behaviour. Software buttons define an area on the touchpad that is a virtual right button. If a finger is in that area when the click happens, the left button event is changed to a right button event. A middle click is either a separate area or emulated when both the left and right virtual buttons are pressed simultaneously.

When the software stack uses the clickfinger method, the number of fingers decide the type of click: a one-finger is a left button, a two-finger click is a right button, a three-finger click is a middle button. The location of the fingers doesn't matter, though there are usually some limits in how the fingers can be distributed (e.g. some implementations try to detect a thumb at the bottom of the touchpad to avoid accidental two-finger clicks when the user intends a thumb click). 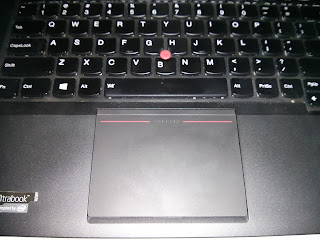 Clickpads are labelled by the kernel with the INPUT_PROP_BUTTONPAD input property.

One step further down the touchpad evolution, Forcepads are Clickpads without a physical button. They provide pressure and (at least in Apple's case) have a vibration element that is software-controlled. Instead of the satisfying click of a physical button, you instead get a buzz of happiness. Which apparently feels the same as a click, judging by the reviews I've read so far. A software-controlled click feel has some advantages, it can be disabled for some gestures, modified for others, etc. I suspect that over time Forcepads will become the main touchpad category, but that's a few years away.

Not much to say on the implementation here. The kernel has some ForcePad support but everything else is spotty. 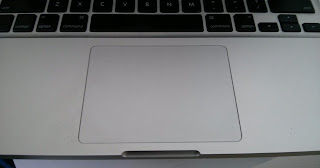 Note how Apple's Clickpads have no markings whatsoever, Apple uses the clickfinger method by default.

In the beginning, there was the single-finger touchpad. This touchpad would simply provide x/y coordinates for a single finger and get mightily confused when more than one finger was present. These touchpads are now fighting with dodos for exhibition space in museums, few of those are still out in the wild.

Pure multi-touch touchpads are those that can track, i.e. identify the location of all fingers on the touchpad. Apple's touchpads support 16 touches (iirc), others support 5 touches like the Synaptics touchpads when using SMBus.

Pure multi-touch touchpads are the easiest to support, we can rely on the finger locations and use them for scrolling, gestures, etc. These touchpads usually also provide extra information. In the case of the Apple touchpads we get an ellipsis and the orientation of the ellipsis for each touch point. Other touchpads provide a pressure value for each touch point. Though pressure is a bit of a misnomer, pressure is usually directly related to contact area. Since our puny human fingers flatten out as the pressure on the pad increases, the contact area increases and the firmware then calculates that back into a (mostly rather arbitrary) pressure reading.

Because pressure is really contact area size, we can use it to detect accidental palm contact or thumbs though it's fairly unreliable. A light palm touch or a touch at the very edge of a touchpad will have a low pressure reading simply because the palm is mostly next to the touchpad and thus the contact area itself remains small.

The vast majority of touchpads fall into this category. It's the half-way point between single-touch and pure multi-touch. These devices can track N fingers, but detect more than N. The current Synaptics touchpads fall into that category when they're using the serial protocol. Most touchpads that fall into this category can track two fingers and detect up to four or five. So a typical three-finger interaction would give you the location of two fingers and a separate value telling you that a third finger is down.

The lack of finger location doesn't matter for some interactions (tapping, three-finger click) but it can cause issues in some cases. For example, a user may have a thumb resting on a touchpad while scrolling with two fingers. Which touch locations you get depends on the order of the fingers being set down, i.e. this may look like thumb + finger + third touch somewhere (lucky!) or two fingers scrolling + third touch somewhere (unlucky, this looks like a three-finger swipe). So far we've mostly avoided having anything complex enough that requires the exact location of more than two fingers, these pads are so prevalent that any complex feature would exclude the majority of users.

A sub-class of partial multi-touch touchpads. These touchpads can technically detect two fingers but the location of both is limited to the bounding box, i.e. the first touch is always the top-left one and the second touch is the bottom-right one. Coordinates jump around as fingers move past each other. Most semi-mt touchpads also have a lower resolution for two touches than for one, so even things like two-finger scrolling can be very jumpy.

Semi-mt are labelled by the kernel with the INPUT_PROP_SEMI_MT input property.

USB or Bluetooth touchpads not in a laptop chassis. Think the Apple Magic Trackpad, the Logitech T650, etc. These are usually clickpads, the biggest difference is that they can be removed or added at runtime. One interaction method that is only possible on external touchpads is a thumb resting on the very edge/immediately next to the touchpad. On the far edge, touchpads don't always detect the finger location so clicking with a thumb barely touching the edge makes it hard or impossible to figure out which software button area the finger is on.

These touchpads also don't need palm detection - since they're not located underneath the keyboard, accidental palm touches are a non-issue. 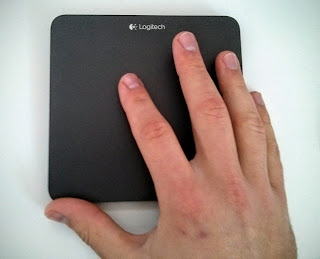 A Logitech T650 external touchpad. Note the thumb position, it is possible to click the touchpad without triggering a touch.

Yes, used to be a thing. Touchpad shaped in an ellipsis or circle. Luckily for us they have gone full dodo. The X.Org synaptics driver had to be aware of these touchpads to calculate the right distance for edge scrolling - unsurprisingly an edge scroll motion on a circular touchpad isn't very straight.

Touch-capable graphics tablets are effectively external touchpads, with two differentiators: they are huge compared to normal touchpads and they have no touchpad buttons whatsoever. This means they can either work like a Forcepad, or rely on interaction methods that don't require buttons (like tap-to-click). Since the physical device is shared with the pen input, some touch arbitration is required to avoid touch input interfering when the pen is in use.

Mostly on older touchpads before two-finger scrolling became the default method. These touchpads have a marking on the touch area that designates the edge to be used for scrolling. A finger movement in that edge zone should trigger vertical motions. Some touchpads have markers for a horizontal scroll area too at the bottom of the touchpad.

A touchpad with a marked edge scroll area on the right.
Posted by Peter Hutterer at 2:40 PM